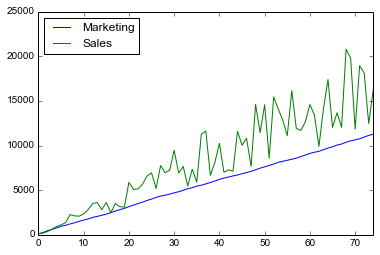 Is This Post Too Long? I’ll Email A PDF Version To You

Okay, so this is my third tutorial about time-series in python. The first one was on univariate ARIMA models, and the second one was on univariate SARIMA models. Today is different, in that we are going to introduce another variable to the model. We’ll assume that one is completely exogenous and is not affected by the ongoings of the other. In real-life I imagine that this is kind of doesn’t exist very often, but it is worth noting that this sort of thing can happen from time to time, and the model is nonetheless useful for a short-term predictions.

Mechanically, ARIMAX and ARIMA do not differ. In fact in StatsModels (and other software), we don’t even make a distinction between the two models. They are so similar that making a distinction is almost petty. Yet, the distinction exists, you can go look it up. So the question is why?

Here are the rules:

These rules of causality form the basis of why ARIMAX deserves to be designated separately from ARIMA, at least in my mind. You see, if you violate any of these rules with your ARIMAX model, it automatically invalidates that model.

Let’s say that you have a variable X which causes Y with a 1 period lag. In other words, X happens, and then 1 period later Y happens because of X. For concreteness, let’s say the number of Republican Congressman elected in a year is X, and the number of tax cut bills passed by congress is Y. We’ll just assume for now that there is a pretty stable positive relationship between these variables, I don’t know if there is or not, that is for political scientists to figure out. Obviously, a Republican would need to be elected before they could influence the number of tax cuts they give out. But what if we got it wrong. What if we regressed X on the lag of Y. We literally just put the cart in front of the horse.

That would imply that tax cuts cause republicans to get elected. We violated rule 4 or rule 5. That just won’t do.

In general, there is no way to avoid this situation except to use your intuition. However, there does exist a test, which can help you to identify whether or not you are making this mistake. That test is a granger-causality test. I wouldn’t put too much stock into this test, mostly because it won’t identify contemporaneous causality. But hey, it would be worth a look to see if we are making an obvious flaw.

It got biased because in order for X and the residuals to be cointegrated the residuals have to be trending, which means that they can not have an expected value of zero. Therefore, the standard proofs that OLS is not biased don’t work, because they depend on the residuals having a mean of zero. So we have to make sure that our X is also stationary.

Run this code and you will see that we have 3 variables, month, marketing, and sales:

We don’t really care about the month variable. So let’s see what these variables look like as time series. We’ll use the following commands to visually inspect these variables.

And when you do that you should see this graph pop-up:

With this you can clearly tell that both time-series are trending which is a fairly clear sign that both series have unit roots. We can check whether or not they have unit roots by using the augmented Dickey Fuller (ADF) test. Also, notice that Sales is more volatile than Marketing. Treating this will be a subject of a future post.

This produces the following output:

Clearly, we can not reject the null-hypothesis that these series have a unit root. So we should difference both series as a first step.

Which gives you the following output:

And here is the code for a differenced time-series regression.

Clearly, there is a difference between these two models. One is just plain wrong. Well, let’s think about this logically for a moment. We get a better fit with the first regression, but when we think about what is going on here, we can remember that both time series are trending. There is a third variable in the mix. Essentially, time is correlated to both my input and output. What happens is that we get a very significant, and wrong, estimate because our coefficient is the ratio of the trends, not the effect that X has on Y. That’s why we get the multicollinearity warning too. Uh-oh, that must mean that the first is wrong, and the second is right. But there isn’t anything significant in the second, we can’t say anything.

Well, what if we didn’t difference marketing, but we did difference sales? Well, that leads to a consistency problem, we have a series without the unit-root regressed on a series with a unit-root, and that causes the problems with error terms that have to have a trend.

Okay, so at this point, we can start looking for the correct ARIMA model using ACF and PACF plots. I’m not going to do that since I covered that at length in my first tutorial. Let’s turn our attention to something else. This issue of causality. How is it that I know that Marketing is driving sales and not vice-versa.

That’s what a granger-causality test is for. The test is whether the first variable is caused by the second variable. Here’s the code:

You can also see by reversing the test that Sales does not cause Marketing:

Finally, here is the full blown code for the correct ARIMAX model. I know this is the “correct” model because I generated the data. But there is more to talk about with this dataset than meets the eye. The biggest problem comes from the fact that I am using non-normal errors, which is throwing things off a bit.

So that’s it. The basic take aways are that when introducing another variable into your time-series, you need to make sure that the time-series is consistent, in that the variables are integrated to the same order, and that the causal structure of your model makes sense not just intuitively, but statistically as well.